- on his journey's to gtsang, his title (i.e. bka' bcu pa and the differing scholastic curriculums at that time, cf. Jackson 2007

- until the early 1430s rong ston based “himself mainly in skyid shod and in the Brahmaputra valley southeast of there, i.e. near lha sa or near the seat of the phag mo gru pas” Jackson 1988 (p. x)

- “rong ston remained one of the most highly estimated scholastics of his time” Jackson 2007 (p. 356) “Though not a polemicist by nature, he probably played through his teaching and writing of commentaries a more decisive and active role in the history of Tibetan scholastic philosophy than one usually supposes” Jackson 2007 (p. 356)

- had great impact on Tibetan scholasticism: not only as regards the sa skya tradition, for a large number of scholastic lineages of the bka' brgyud pa and rnying ma also passed through rong ston Jackson 1988 (p. i)

- “Rong ston's exegesis was the culmination of three centuries of intensive studies by scholars in the gsang phu ne'u thog and allied traditions […]” Jackson 1988 (p. i)

- on rong ston and mkhas grub doctrinal conflict (and their impact of the rgyal rtse ruler, cf. Jackson 2007 (pp. 353f.) 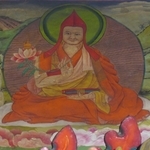